So, you may have read previously on my blog that I swap elementary school student escorting services with my neighbor. She has a fourth-grade daughter P and a second-grade daughter K. My own son is also in second grade. (In fact K and my son have been in the same classroom together for three years running now!) I walk or drive the three kids to school on Monday and Wednesday mornings, and my neighbor takes them all on Tuesdays, Thursdays, and Fridays. We've had some kind of delivery arrangement for several years now, and we've gotten to know one another's kids pretty well.

One day back in September, my neighbor mentioned that K had a question she wanted to ask me. A few mornings later, K finally worked up the courage to ask me her question. She explained that she had a very favorite pair of PJs that she had outgrown but couldn't bear to see handed down to her younger sister L (now 4 YO). She knows that I sew (I've made her and her sisters and mom fabric tote bags and backpacks in the past), so she asked me if I could make her pajamas into a blanket for her so she could keep her favorite PJs "alive," so to speak.

Well, I was a bit taken aback. A little size 5 pair of PJs doesn't go very far, so I knew that they would have to be cut up for some kind of patchwork. And, in my opinion, there's a reason "patchwork" is called just that--there is a lot of work involved: cutting all that fabric up into perfect squares, aligning everything perfectly, endless pinning, stitching, pressing, etc. Plus, while, yes, I do sew (and for six years I operated a homegrown business making and selling fabric handbags and totes), I am not a quilter. I have made a few patchwork-type items in my time, but they would never pass as quilts. The whole quilt-making process just doesn't interest me; it's too complicated and time-consuming for me. And I have to admit that after sewing for so long for my business, I'm burned out and haven't had much interest at all in sewing in the past year since I closed up shop. I was also thinking of all the work I had going on--I was in the middle of two long-term freelance projects and had just started terms on two different stamping design teams. How would I ever find time to squeeze in the making of a patchwork blanket??

Well, I started by asking a lot of qualifying questions. There wouldn't be a lot of fabric from her jammies, so I'd have to cut them up into squares. Would that be OK? Yep. I'd have to add in squares of other fabrics so there would be enough to sew into a decent quilt top. Would that be OK? Sure. Because of fabric and time restrictions, it would be on the smaller size (I had "crib" size in mind), big enough to wrap up in but not big enough to cover your twin bed. Is that OK? I don't mind. I have a lot going in the next few months, so I wouldn't be able to get to it right away. How about if I make it for your birthday (Dec. 27)? That's fine.

And in the end, I couldn't say no to this sweet little seven-year-old who got up the courage to ask me to do her a favor.

The following week I packed up all of the fabrics I had in my stash that might match or coordinate with the treasured PJs. After school one afternoon, K and I sat on the big rocks ringing the school playground so she could pick out three fabrics for the other patches of her blanket. She took this job very seriously and picked her fabrics with pride. And then that's all I had time for. All during the rest of September and all of October and November, K's blanket project hung over my head. I was too busy with my own family, with my work, with my cardmaking, with life in general to start on her blanket, but it was there in the background, and I was worried sick that I wouldn't be able to come through for her like I'd promised.

Finally, in December--my busiest time of year, both because of holiday preparations and January work deadlines--I had to start scheduling time for making progress on K's blanket. I delegated gift-wrapping chores to my own kids (who were happy to do it!). I gave up making and delivering gifts to our neighbors (no one even bothered thanking us last year, so I figured no one would miss it). I pared down my Christmas card list. I virtually stopped making cards (horrors!!) for a few weeks. And slowly the blanket started taking shape. But it came down to the wire. I was pressing open patchwork seams on Christmas afternoon while my kids and hubby were busy with their new Christmas toys. On the 26th, as we neared the starting time of a blizzard warning, I pushed everything else aside to finish the rest of the sewing--I was terrified that we would lose power in the storm and that I wouldn't be able to finish K's blanket in time for her birthday the next day. I spent some cozy time under the blanket tying quilt knots that afternoon while the snow swirled around outside. And then it was done. Done! It's not perfect--far from it--but I finished it, just in time. 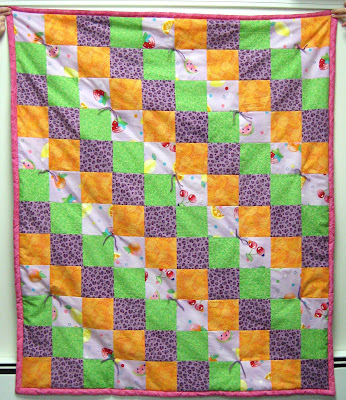 (The purple leopard print squares are from K's favorite PJs.) 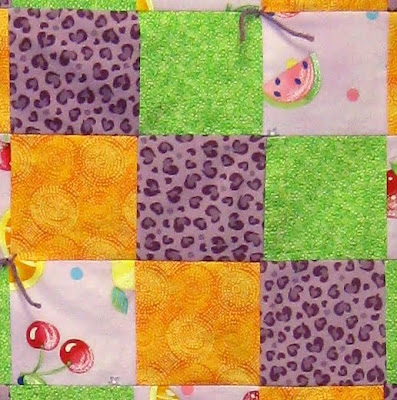 On the morning of K's birthday, I wrapped up her new patchwork blanket in birthday paper and made a quick birthday card to go with it. It's nothing at all fancy, but I tried to make it match her new blanket. 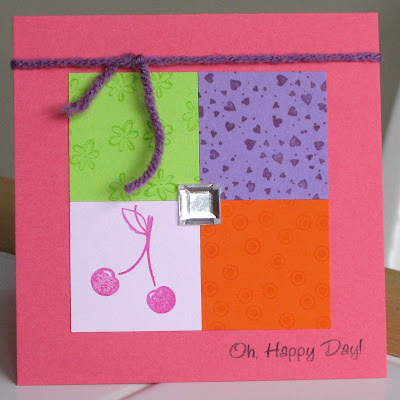 After my family had dug out our driveway and sidewalks after our post-Christmas blizzard, I called my neighbors to see if I could drop by for a minute. I was so pleased to be able to watch K unwrap her present. The child was vibrating with excitement. I don't think any blanket has ever been this eagerly anticipated. She was, I think, blown away. She was definitely smiling from ear to ear as she was happily reunited with her favorite PJs, or at least a new incarnation of them. Later her mom told me that she spent the rest of her birthday snugly wrapped up in her new patchwork blanket. I guess that makes it all worthwhile. I just hope that K's sisters don't get any bright ideas when they outgrow their favorite jammies . . .
Posted by Emily Keaton at 7:00 AM

OMG, Emily, I have tears in my eyes as I write this. You made such a beautiful, meaningful, personal quilt and card to match. I have to wipe my eyes before my hubby sees me crying, or he'll think I'm loony!

Oh, Emily! What a wonderful thing to do for you little neighbor! I am sure the excitement and happiness she showed, made it all worth it! The quilt looks pretty darn perfect to me!
I have always wanted to quilt and have made a couple tiny ones (think wall hangings), but an actual quilt that someone could wrap up in, seems daunting.
You rock, girl! :)

Fabulously done!!! Nothing better than seeing deep, heartfelt joy on the face of a child. Well done! The quilt is wonderfully done and I"m sure you hold a very special place in that child's life. Blessings to you for doing it for her (((hugs))).

Emily, that is such a wonderful thing for you to do, and you did the quilt so well! How sweet is that, to have a pair of PJ's you cannot part with, and now have them with you for many years! Thanks for sharing!

Thanks for recent visits to my poor broken blog! lol Hope to be up and running soon!
Hugs, Pat

Oh Emily! What a lovely story and what a lucky little girl to have a neighbor that would show so much love. I'll bet she will remember this always! Happy New Year! And may the beginning of 2011 be a bit calmer than the end of 2010! Hugs.

Emily, that is such a wonderful story and I thank you for sharing it. I knew you were a sweetheart from the first time we "talked". I think your quilt looks beautiful and so does the matching card. What a lucky little girl your neighbor is!

What a treasure you made for that young girl....not just her jammie quilt, but the love she knows you put into making it for her...I am SURE that it and YOU are very special treasures she will cherish forever.....kudos my friend....you truly expressed the spirit of giving......

Oh my...Emily, what a treasure for this little girl. She will remember it for the rest of her life. I am sure you made such an impact on her doing exactly what you told her and having it ready for her birthday. Now, she won't have to hand down her pj's to her little sis. LOL I bet she is curled up in that quilt every night. You're a super person, Em!! The card is perfect and I am sure it was an extra warm feeling to receive.
Let's see, I think I have a pair of old jammies to send your way and need a quilt.......... LOL 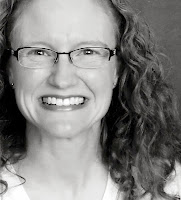